A Basic Introduction to Logistics

Logisticians are a sad and embittered race of men who are very much in demand in war, and who sink resentfully into obscurity in peace. They deal only in facts, but must work for men who merchant in theories. They emerge during war because war is very much a fact. They disappear in peace because peace is mostly theory. The people who merchant in theories, and who employ logisticians in war and ignore them in peace, are generals.

Generals are a happy blessed race who radiate confidence and power. They feed only on ambrosia and drink only nectar. In peace, they stride confidently and can invade a world simply by sweeping their hands grandly over a map, point their fingers decisively up train corridors, and blocking defiles and obstacles with the sides of their hands. In war, they must stride more slowly because each general has a logistician riding on his back and he knows that, at any moment, the logistician may lean forward and whisper: “No, you can’t do that.” Generals fear logisticians in war and, in peace, generals try to forget logisticians.

Sometimes a logistician becomes a general. If he does, he must associate with generals whom he hates; he has a retinue of strategists and tacticians whom he despises; and, on his back, is a logistician whom he fears. This is why logisticians who become generals always have ulcers and cannot eat their ambrosia.

A few months ago I did couple of posts on the subject of warship types what I thought might be useful and interesting is a short and very basic primer on the subject of military logistics and how a science fiction/fantasy writer can and probably should account for it in their work. I’m going to be mentioning some good and bad examples as well as some history books which I’ve found useful.

At a very basic level logistics is the science of getting the what a military force needs from the centers of production (farms, factories, whatever) to the military forces directly in contact with the enemy, while at the same time moving backwards casualties, prisoners etc, etc. This is often referred to as the lines of communication and exactly what is a military force needs depends on the setting. This will involve not only transportation but also stockpiling, storage and distribution.

The most basic supplies any force will require are food and drink, in a pre-industrial setting like Lord of the Rings, that can to a certain extent be obtained via foraging or outright looting. It is worth noting that for most of recorded history, an army moving through your area was a disaster, regardless as to which side it or you were on. If half a dozen soldiers with swords decided they were going to take your last milk cow, polite refusal probably wasn’t going to achieve much. The advantage of this kind of system is that there really weren’t any lines of communication for an enemy to threaten, the big problem however was it placed a serious time limit on how long an army could stay concentrated in one area. After a while all of the resources would be consumed and an army would have to move on, disperse or starve. This is where we get the whole concept of Scorched Earth; if an attacking army is faced with a region where the resources have already be consumed or destroyed, then the time it can spend in that region is severely limited. This could be a major factor in siege warfare, where the attacker could be in just as much danger of starving as the defender. So while Tolkien might be one of the founding father of Fantasy, given how how it it described, Sauron would have a hard time his armies from starving in Mordor. A fiction work that at least touches on the complications of pre-industrial logistics is Juliet McKenna’s Chronicle of the Lescari Revolution. On a final note prior to the development of the railways, movement during the Winter months and armies either dispersed or retired to winter encampments. Even in more modern times there have been battles and campaigns that have petered out because weather conditions meant supplies could not be moved up to the front.

Logistics in the Industrial Age

My men can eat their belts, but my tanks have gotta have gas.

Up to the Napoleonic Wars it was possible for an army to at least to a certain extent live off the land, gun powder from enemy sources was usable and individual soldiers could cast their own bullets provided they could obtain lead. However somethings like cannonballs, had already passed beyond what troops in the field could make or obtain for themselves.  During the close of the nineteenth century technology changed logistics became increasingly complicated. Improvements in transportation and storage, were matched by expansion in the volumes and types of supplies needed by an army in the field. As the above quote indicates by the middle of the twentieth century oil had become the one of the dominate resources, especially for an advancing army but in general terms an army needed an unbroken line of supply leading from the factory gate to the front line and here in lies both a complication and opportunity.

An army on the advance is inherently moving away from its logistical support, while the Defender is retreating a long its own lines of communication. This means the attacker needs to be careful not to advance too far in case it out runs its supplies and leaves itself vulnerable. Even if it is advancing with no meaningful opposition in its path, an army can be brought to a grinding halt by lack of supply. The term for this that I have come across and used in my work is Logistical Brake. If you are looking for a real world example, any book covering the war in the Western Desert between the German/Italian forces and those of the British Empire is ideal, since this conflict was being fought in the open desert, which mean other complicating factors weren’t present. What you will notice as you read the history of the Desert War is how often the lines of communication were the objective. Each sides commanders sought to get through or round the opposing side to cut supply lines, since no matter how strong an armies position was, it would be worthless unless supplies could be brought to it.

There is a myth that in the days of sail ships were powered by the wind, the reality is that it all depended on human muscle. Raise anchor? Human muscle. Do really anything with the sails, human muscle. Like any other engine humans required the right fuel. During the age of exploration diseases like scurvy would cut a swath through crews because it wasn’t understood just how necessary fresh fruit and vegetables were, plus storage was somewhere between difficult and impossible. In theory however, if a vessel could be kept supplied with fresh food and water, it could remain at sea for extended periods. This was best demonstrated by the Royal Navy during the Napoleonic Wars where ships of the line blockaded continental ports for years at a time. With the coming of the steam engine a ship could be freed from the whims of wind and tide, but only as long as the fuel held out. Take a look at the two pictures below. 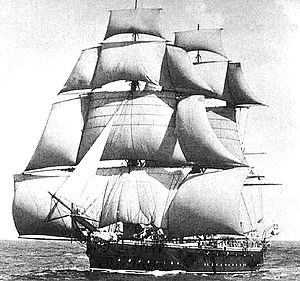 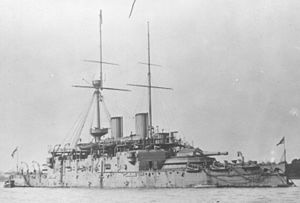 They are respectively HMS Calypso and HMS Camperdown, looking at them you could be excused for thinking they belong to totally different time periods with Calypso perhaps being a part of Admiral Nelson’s fleet. In fact they were built at the same time – the early eighteen eighties. The difference was Camperdown was a battleship, designed to operate within European waters, Calypso was a corvette (later re-designated a cruiser) intended for places like the Pacific, where refueling points would be few and far between. In the modern navies, it is the proud ranks of fighting ships that get the attention but if you care to glance across this Wikipedia page, listing the current strength of the US Navy, you will notice that the list of non-combat support ships is longer than those that in time of war would do the fighting. An expensive necessity if the US Navy is to operate more than a few days out from its home ports.

Once fuel became a factor, the time a ship could spend at sea became far more limited and many’s a captain undoubtedly developed ulcers watching their ships’ fuel levels drop lower and lower. A fully armed, undamaged vessel might be required to turn away from a fight or not be present at the critical moment, all because it had to leave for re-supply. One fascinating demonstration of this is the hunt for and destruction of the German battleship Bismarck, where on either side ships were either forced out of the chase completely or unable to crack on the extra bit of speed that might have made all the difference. I won’t attempt detail the saga – I couldn’t do it justice – but I do recommend Pursuit: The Chase and Sinking of the Bismarck by Ludovic Kennedy, it is now a somewhat old book and some research has become available since its publication but is an easier read for the newcomer.

So now that we’ve covered the very basics of Logistics there remains one big question – why the heck should a writer give a two hoots about logistics, the reader wants action! Well for a start there is realism. If the work in set in a historical period, if it is to be a living, breathing world, then it needs to follow reality of that time. Whatever it costs the writer in time a research, will rewarded with a deeper work in which the reader can more thoroughly immerse themselves.  If your characters are operating in any kind of military capacity, where the next meal for themselves or those under their command is coming from, will always be a consideration.

The other reason, and this is possibly more important, is the sheer possibilities for drama it offers the writer. The General aware that if the snows doesn’t clear soon there will be famine in the camp, The starship captain hunting the alien raiders with with only fuel to search one solar system, the trooper in the front line trying to conserve ammunition as the enemy closes, this is all the stuff of drama. It may seem like a tiresome detail in fact for anyone writing any sort of military fiction logistics will be one of your most useful plotting tools.