I’ve recently been reading Tank Men by Robert Kershaw which covers tank warfare during the two world wars; not the mechanical details or grand strategy that saw these machines sweep across the battlefield, but instead it is about the people inside them and I’ll say now that for anyone with an interest in the topic, it is well worth a read. Primarily for it’s visceral portrayal  of the results of combat. 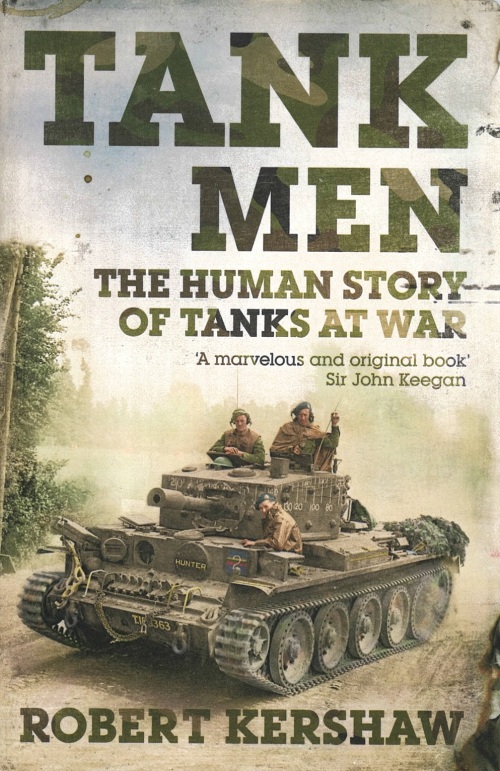 World War Two tanks were not easy to get in and out of at the best of times (I doubt they are much better now).  If you were a crewman in a tank when the armour was penetrated, if you were lucky you were unhurt and could get out. If you were slightly less lucky you were dead and never felt it. If you were unlucky you were hurt or trapped and couldn’t get out when it began to burn. It was a fear common to all tankers, regardless to which country they belonged to. I did a battlefield tour of Normandy a few years ago, which obviously included visiting a number of military graveyards. In the British, the gravestones are laid out in neatly spaced rows, except some gravestones are place pressed up with no spaces between them. Usually two to five graves, generally the bodies within are airforce or armoured regiments. It is to signify that while they knew who was in a particular tank or plane, when the bodies were recovered from a burnt out wreck, there was no way to know which body was which person. All pretty horrible stuff. In fact – speaking as someone who has never served in the armed forces – I would say probably impossible to imagine or even properly describe by those who have seen such things, but as a writer of Military SF I have to try.

At 5 am, the first wounded came back, cheerful, optimistic.  We splintered fractures, covered wounds with sterile dressings and relieved each other for breakfast at 6.30 am.  As the day wore on, sunny and scorching hot, the tide of casualties rose.  Dozens and dozens were carried in.  Our treatment centre always had 3 upon the trestles being attended to and soon the approaches were lined with a queue.  Hour after hour we worked and evacuated and still the flow continued.  Ghastly wounds there were, of every type and state of severity.  Heads with skulls so badly smashed that bone and brain and pillow were almost indivisible; faces with horrible lacerations; jaws blown completely away leaving only two sad eyes to plead for relief from pain.  Chests pierced through with shrapnel and lungs that spouted blood from gushing holes.  Arms were mangled into shapeless masses left hanging by muscle alone and waiting the amputation knife.  There were abdomens pierced by shell splinters and displaying coils of intestine, deadly wounds.  Buttocks were torn and in some cases spinal injury had followed bringing paralysis.  But the leg wounds!  Thigh bones splinted; knees without knee caps, legs without feet red, mangled flesh and blood flooding the stretcher.  And others trembling uncontrollably, sobbing like children, strapped to the stretcher and struggling to be free; screaming and, when a shell landed near the ADS (Advance Dressing Station), shouting, ‘They’re coming again, O God they’re coming again.’  Not heroes, but sufferers nonetheless.  We ate our lunch of biscuits and corned beef with bloody fingers and when relieved by 9th Field Ambulance at 6 pm we had treated 466 British soldiers and 40 Germans.

Film and television, even at its grittiest, is never going to match that kind of brutality, in fact sometimes when it tries, the effect can come off as more comical than anything else. The fact they we know what we see is the product of the makeup artist’s craft renders even the most realistic effects unbelievable. In fact one of the most realistic and disturbing depictions I’ve seen is the 1965 pseudo documentary The War Game, where the effects were by today’s standards primitive but the use chilling*. So it is probably now wonder that most film and television prefers to depict battlefield casualties as people who fall down nice and neatly. While I was writing the Nameless War I did try to cover this, which has lead occasionally to the question ‘is there any characters you didn’t kill?’ To which I joke ‘yes, the ones I maimed instead’. But in all seriousness it was an attempt by me to convey, without over doing it, the awfulness of war and making it back doesn’t mean coming back undamaged.

I now while I was considering this post – and procrastinating – I came across a article We Have Always Fought – Challenging the ‘Women, Cattle and Slaves’ Narrative

As somebody with more than a passing knowledge of history (All the Thing That Came Before Me), I’m passionately interested in truth: truth is something that happens whether or not we see it, or believe it, or write about. Truth just is. We can call it something else, or pretend it didn’t happen, but its repercussions live with us, whether we choose to remember and acknowledge it or not.

When I sat down with one of my senior professors in Durban, South Africa to talk about my Master’s thesis, he asked me why I wanted to write about women resistance fighters.

“Because women made up twenty percent of the ANC’s militant wing!” I gushed. “Twenty percent! When I found that out I couldn’t believe it. And you know – women have never been part of fighting forces –”

He interrupted me. “Women have always fought,” he said.

“Women have always fought,” he said. “Shaka Zulu had an all-female force of fighters. Women have been part of every resistance movement. Women dressed as men and went to war, went to sea, and participated actively in combat for as long as there have been people.”

I had no idea what to say to this. I had been nurtured in the U.S. school system on a steady diet of the Great Men theory of history. History was full of Great Men. I had to take separate Women’s History courses just to learn about what women were doing while all the men were killing each other. It turned out many of them were governing countries and figuring out rather effective methods of birth control that had sweeping ramifications on the makeup of particular states, especially Greece and Rome.

Half the world is full of women, but it’s rare to hear a narrative that doesn’t speak of women as the people who have things done to them instead of the people who do things. More often, women are talked about as a man’s daughter. A man’s wife.

The rest of this article can be found HERE and again is well worth a read through; I came to is via a forum I occasionally glance at and before it became an argument, the point was made that we don’t see women killed very often in military type film and television and see them maimed even less often. Literature does better but film and television haven’t made much forward motion in decades. As far as I can remember the recent Force Awakens had a token female X-Wing pilot – assuming all alien pilots were male – and she made it back. The various imperial stormtroopers and pilots are assumed to be male (with one exception). While women were visible on the Star Killer base/planetoid if they were killed, it was off screen unlike the waves of Stormtroopers that got gunned down. Now you might be thinking ‘does this guy want to see women dead or maimed? What kind of sicko is he?’

Well let me put it like this. As We Have Always Fought points out women have always been a feature of warfare. In SF a man’s main advantage, his on average greater physical strength, is far less important. Flying a fighter doesn’t make the same physical demands as say fighting with a sword. To refuse to put women onto the fictional battlefield, the fictional casualty dressing station and fictional battlefield grave as uniformed personnel, is to write them out of the narrative completely. I have heard that in the first of the original three Star Wars films an actress was filmed as a rebel pilot, complete with fireworks behind her and the usual comment on the X-Wings combat performance – I’M HITTTT!!!!……. but it was cut from finished film.

Sure you can point to the occasional named hero or villain but where is the female faceless goon or red shirts? As a society we are still reluctant to see women getting killed or hurt in defence of their society** or subjugating the galaxy which does inevitably diminish women by default. For literature in particular it is a relatively easy one to start to address, a handful of hers instead of hims will give a sense of a more inclusive world and something on which we can build.

As ever thoughts and comments welcome.

* The film being a depiction of Great Britain is the aftermath of a nuclear strike.

** although crime drama is quiet happy to kill them by the bucket load.